The Power of Nightmares Part II
Next Video

The Power of Nightmares Part I 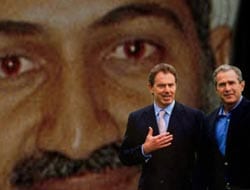 This is part I of the award winning BBC series, which has been screened in a feature documentary version at Cannes 2005. The series questions whether we should be worried about the threat from organised terrorism or is it simply a phantom menace being used to stop society from falling apart?
In the past our politicians offered us dreams of a better world. Now they promise to protect us from nightmares. The most frightening of these is the threat of an international terror network. But just as the dreams were not true, neither are these nightmares. In the series, the Power of Nightmares explores how the idea that we are threatened by a hidden and organised terrorist network is an illusion. It is a myth that has spread unquestioned through politics, the security services and the international media.

‘Baby it’s cold outside’ explores the origins in the 1940s and 50s of Islamic Fundamentalism in the Middle East, and Neoconservatism in America. It parallels between these movements, and their effect on the world today.

‘The Phantom Victory’ looks at how two groups, radical Islamists and neo-conservatives with seemingly opposing ideologies came together to defeat a common enemy in Afghanistan (Communism).

The concluding part, ‘The Shadows in the Cave’ looks at how the shock and panic caused by the 9-11 attacks have led to the world today. It balances the idea that there is a dangerous and highly organized group of fanatical individuals around the world that has been inspired by extreme Islamist ideas, and that will use the techniques of mass terror.

Sayyid Qutb (1906 -1966) was an Egyptian intellectual, author, and Islamist associated with the Egyptian Muslim Brotherhood. One of Qutb’s main ideas was applying the term Jahiliyya to modern-day Muslim societies. In his view, turning away from Islamic law and Islamic values under the influence of European and American imperialism had left the Muslim world in a condition of debased ignorance, similar to that of the pre-Islamic era (or Jahiliyya).(See Wikipedia)

Leo Strauss (1899-1973), was an American political philosopher of German-Jewish extraction. He is widely considered to be one of the leading intellectual sources of neoconservatism. Strauss taught that Liberalism, strictly speaking, contained within it an intrinsic tendency towards relativism, which in turn led to a sort of nihilism–a kind of decadence, value-free aimlessness, and hedonism which he believed he saw permeating through the very fabric of contemporary American society.(See Wikipedia)

The Birth of fundamentalism

On his return in Egypt, Qutb associated with The Muslim Brotherhood. The ‘Brotherhood’ was founded in 1928 by Hassan al-Banna, a schoolteacher, to promote a social renewal based on an Islamic ethos of altruism and civic duty, in opposition to political and social injustice and to British imperial rule. The ‘Brotherhood has always been a somewhat secretive society as it was modelled after the Freemasonry. In the early days ‘The Brotherhood wanted to protect the workers against the tyranny of foreign and monopolist companies.(See Wikipedia)

The 12th Street Riot in Detroit began in the early morning hours of Sunday, July 23, 1967. Vice squad officers executed a raid at a blind pig, an illegal after-hours drinking establishment on the corner of 12th Street and Clairmount on the city’s near westside. The confrontation with the patrons there evolved into one of the most deadly and destructive riots in modern U.S. history, lasting five days and resulting in 43 dead, 467 injured, over 7,500 arrests and in more than 2,000 buildings that had burned down.

The seeds of the 12th Street riot had been planted in the extraordinary growth of Detroit as the auto industry that placed the city at the industrial center of the nation. The availabilty of high-paying and unskilled work in auto plants attracted many from the south, both black and white, who brought their often conflicting cultures into the community. The civil rights movement was in full swing at the time, and black demands for power and the antipathy of the white establishment created a tinderbox.

Henry Alfred Kissinger (born 1923 in F?rth, Germany) is an American diplomat, Nobel laureate and statesman. He served as National Security Advisor and later Secretary of State in the Nixon administration, continuing in the latter position after Gerald Ford became President in the aftermath of the Watergate scandal. Kissinger favoured the maintainance of friendly diplomatic relationships with anti-Communist military dictatorships in the Southern Cone and elsewhere in Latin America, and approved of covert intervention in Chilean politics.(See Wikipedia)

A proponent of Realpolitik, Kissinger played a dominant role in United States foreign policy between 1969 and 1977. During this time, he pioneered the policy of d?tente that led to a significant relaxation in U.S.-Soviet tensions and played a crucial role in 1972 talks with Chinese foreign minister Zhou Enlai that concluded with the “opening” of China and the formation of a new strategic anti-Soviet Sino-American alliance.

Richard Milhous Nixon (1913 – 1994) was the 37th President of the United States, serving from 1969 to 1974. He resigned in the face of imminent impeachment related to the Watergate scandal. Nixon is noted for his diplomatic foreign policy, especially d?tente with the Soviet Union and China, and ending the Vietnam War. He is also noted for his middle-of-the-road domestic policy that combined conservative rhetoric and, in many cases, liberal action, as in his environmental policy.(See Wikipedia)

The rise of neoconservatism

In 1974 American confidence had been shettered by the defeat in Vietnam and the resignation of President Nixon over Watergate. Appalled by this, the neoconservatives seized their moment. They allied themselves with two right-wingers in the new administration of Gerald Ford. One was Donald Rumsfeld, the new Secretary of Defense. The other was Dick Cheney, the President’s Chief of Staff.

During the Ford administration Rumsfeld oversaw the transition to an all volunteer military and was instrumental in increasing the power of the military within the administration and at the expense of the CIA and Henry Kissinger. This was accomplished by promulgating the view that the Soviet Union was increasing defense spending and pursuing secret weapons programs, and that the proper response was a re-escalation of the arms race. Some say that this view was in contrast to CIA and accepted reports on the declining state of the Soviet economy.

How President Ford was misled

Rumsfeld believed that the Soviets were secretly building up their weapons, with the intention of attacking America. He persuaded President Ford to set up an independent inquiry. He said it would prove that there was a hidden threat to America. The inquiry would be run by a group of neoconservatives, one of whom was Paul Wolfowitz. Indeed they found prove, but what they found was highly questionable.

Six years before in 1973, Egypt’s economy was low and it’s regime unstable. In an effort to restore morale, Sadat, together with Syria, led Egypt into the Yum Kipur war with Israel. While the territorial gains of Egypt in this war were limited, the war eventually led to regaining the Suez canal. As a result Egypt became the most powerful of the allied Arab nations, and an icon of Arab nationalism. Yet, Egypt’s economy stayed low. So Sadat, confident as the ‘Hero of the Crossing’, opened up to western capital and prestige.

Despite his status as ‘Hero of the Crossing’, Sadat failed to let everyone profit from the flood of western capital that was being invested in the country. What’s more, in November 1977, Sadat became the first Arab leader to visit Israel, thereby implicitly recognizing Israel. This was viewed by the Arab/Muslim world as a “sellout” maneuver, i.e., he relinquished Arab loyalties in exchange for alliance with Israel and the US (intending to improve Egypt’s own economy individually).

The policies of the last Shah of Iran led to strong economic growth during the 60’s and 70’s but at the same time, opposition to his autocratic pro-Western rule was severely repressed. The Islamic Revolution in 1979 saw the Shah’s overthrow by Khomeini. Under Khomeini’s rule, Sharia (Islamic law) was introduced. Although he believed in a free market economy, with respect for private ownership, he didn’t allow wealthy individuals to participate in the government. Politicians should follow his example and live a modest lifestyle, devoid of elitism.

Throughout his many writings Khomeini consitently promoted his vision of a theocratic Islamic society, guided by the morality and ethics of the clergy, that was remarkably similar to that of Qutb. Anwar Sadat, of coarse, was appalled by the Islamic Revolution and the overthrow of the last Shah, because it was exactly the kind of thing he tried to prevent happening in Egypt.

In September of 1981, Sadat cracked down on Muslim organizations and Coptic organizations, including student groups; the arrests totalled nearly 1600, receiving worldwide condemnation for the extremity of his techniques. On Oct. 6, the month after the crackdown, Sadat was assassinated by army members who were part of the Egyptian Islamic Jihad organization. They opposed Sadat’s negotiations with Israel, as well as his use of force in the September crackdown (See Wikipedia).

Those who carried out Sadat’s assassination were arrested and immediately executed. In addition, the r?gime launched a massive manhunt for those behind the plot. Nearly 300 Islamists, including Zawahiri, were put on trial in a pavilion in Cairo’s industrial exhibition park. It was agreed that Zawahiri would be their spokesman.

Reagan’s foreign policy is noted for the vast buildup of the military and change from containment of the Soviet Union to confrontation. Reagan was committed to the ideologies of democratic capitalism and anti-communism, and is considered the decisive figure in orchestrating the collapse of Soviet Communism in 1991, as well as the emergence of the American conservative movement. His personality so dominated the 80s that the decade is increasingly referred to as the “Reagan Eighties”.(See Wikipedia)

The Power of Nightmares Part II