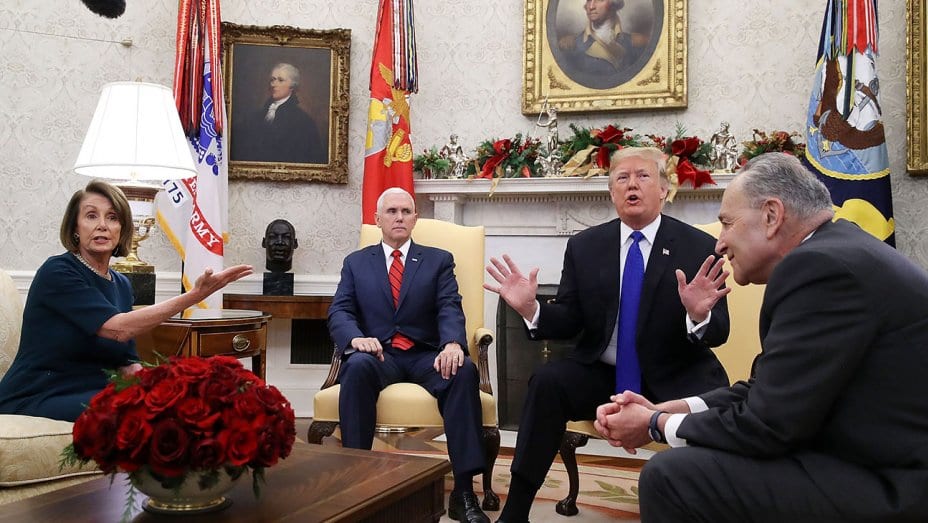 House Minority Leader Nancy Pelosi (D-Calif.) and Senate Minority Leader Charles E. Schumer (D-N.Y.) had a clashed  with President Trump over border security, during a meeting in the Oval Office. The clash over border security was an attempt to avoid a government shut down which stemmed from an impasse over Trump’s demand for $5.7 billion in federal funds for a US–Mexico border wall..

Donald Trump’s promise to build a “big, beautiful wall” between the US and Mexico was a rallying cry throughout his 2016 election campaign. Therefore, once president, Trump signed Executive Order 13767 in January 2017, which formally directed the US government to begin attempting wall construction along the Mexican border using existing federal funding. However, the order met steep opposition in the (democratic) senate, because of the significant expense and lack of clarity on how it would be funded.

But not only that, many (also several leading republicans) perceive Trump’s Wall plan to be deeply rooted in Xenophobia. Although Trump claims that the Wall is about ‘Border Security’, the opposition believes that Trump’s Wall is about an ‘irrational’ fear of outsiders and designed to address a key concern of his base: the browning of America. Bluntly, Trump’s Wall, if built, will likely be the largest and most expensive monument ever constructed to try and ensure the demographic supremacy of white America.

Because Trump could not agree with Congress to include the funding of the Wall in the budget of the federal government, Trump stepped up his demands to release the funds anyway by threatening to shut down the US government. He claimed that the impasse between him and Congress had created a situation that called for a national emergency, which justified the extreme measure of a shutdown

Topic Overview - Who Is Donald Trump