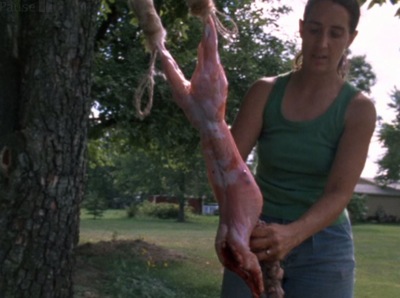 Roger & Me, by celebrated director Michael Moore is a remarkable documentary film that reigns among documentaries’ super-classics. The film transcends its time as it is the first documentary to really show the consequences of free-market globalization.

The deep chasm between the haves and have-nots opens wide in Flint, Michigan in the 1980’s as General Motors decides to relocate its production facilities elsewhere. Within a few years, tens of thousands were put of work,  the city went bankrupt and its population was decimated. With hindsight we could say that flint was one of the first cities that formed the cradle of populism.

Michael Moore takes up the case of his hometown, Flint. As the self-appointed representative of the people of Flint, he picks up the camera and  embarks on a quixotic quest to find GM’s then-chairman, Roger Smith, and get to the bottom of things. Moore sketches his case in broad strokes, allowing the corporate fat cats to shoot themselves in the foot either in interviews or in candid footage, meanwhile intercutting a tragic series of local foreclosures and evictions.

All the while, Moore’s camera proves an utterly disarming presence, and even those familiar with the media spotlight — including Flint native Bob Eubanks and former Chevy spokesman Pat Boone — seem caught unawares, looking foolish at best and heartless at worst. In the end, Big Business and the rich appear indifferent and even cruel, while everyone else seems mindless, deluded, or just recently homeless. This makes for an often wickedly funny yet disturbing film that asks tough questions about corporate responsibility while exposing a nightmarish side of early globalization