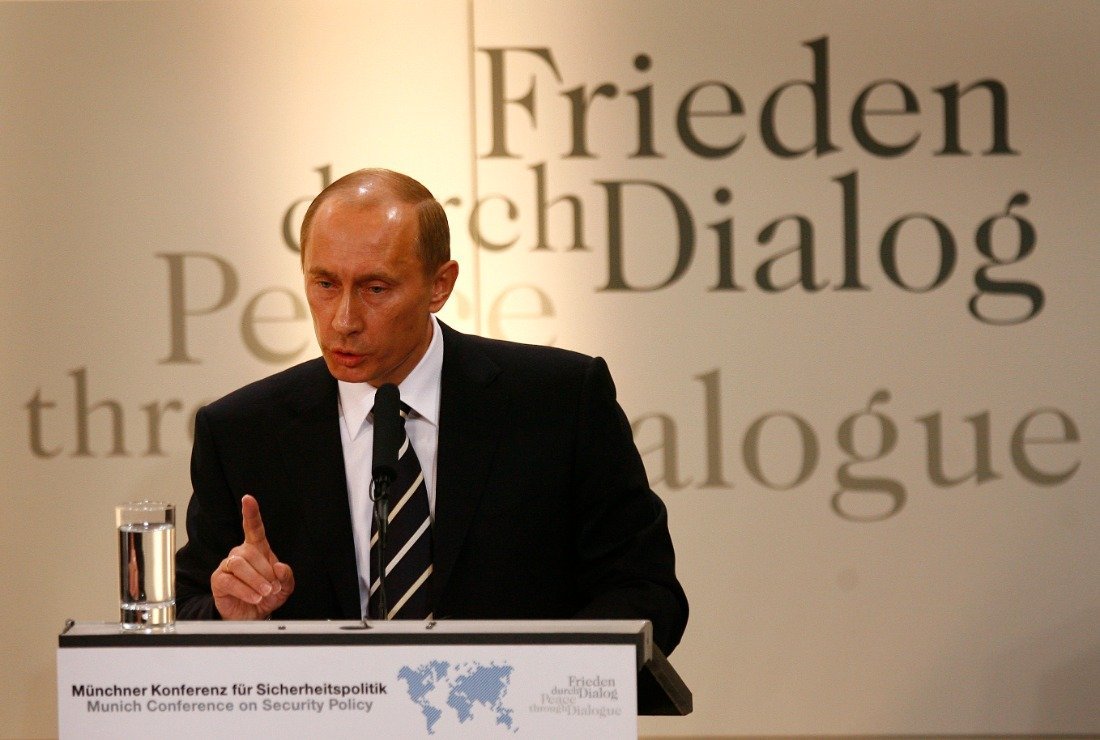 0
533
1
0
main topic | Ukraine War
" Back in 2007, many people criticized me for my talk at the Munich Security Conference. But what did I say there? I merely pointed out that the former NATO Secretary General Manfred Wörner had guaranteed that NATO would not expand eastwards after the fall of the Wall. "

1The text on this page is largely copied from an article in Politico titled – The Speech in which Putin told us who he was. Politico.In february 2007, Russian President Vladimir Putin used the gathering to issue a broadside that definitively rejected the European security order many in his audience had spent years trying to build. In February 2007, Putin stood in Munich’s Bayerischer Hof for 30 minutes and accused the United States of creating a unipolar world “in which there is one master, one sovereign.” He added, “at the end of the day this is pernicious.” 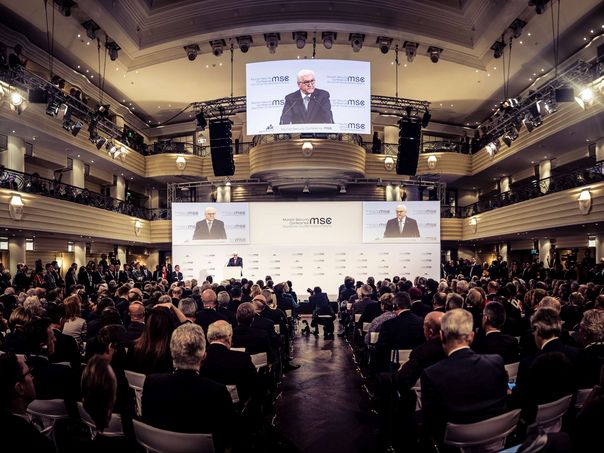 About the Munich Security Conference

The beautiful and prosperous city of Munich, Germany, has many claims to notoriety. It was the hotbed of early Nazism, the site of Neville Chamberlain’s famous meeting to appease Hitler and, later, a hub of German resistance to Hitler. Now, it’s the venue for one of the most significant security conferences in the world.

It wasn’t really Putin’s excoriation of the United States for hypocrisy after its invasion of Iraq that was notable; this was pretty much mainstream German, French, and much American thinking. The real moment of revelation was his broader conclusion that the U.S.-led liberal order, a.k.a. the Free World, was of no interest or value to Russia.

Putin’s speech came as a shock to those who had invested substantial effort in working with Russia to include it in a post-Cold War global stability system – and, at the time, still believed this was possible. A decade and a half later, a massive Russian military build-up in and around Ukraine is capable of striking at any moment. We should not now be surprised or confused. He made clear his intentions already in 2007.

What is more surprising is how the U.S. and Europe, despite Putin’s obvious warning in Munich and Russia’s many actions over 15 years, have nonetheless clung to the notion that we can somehow work together with Putin’s Russia on a strategic level. It is finally time for the West to face facts. Whether or not Putin launches a major new invasion of Ukraine, he has rejected the post-Cold War European security architecture and means it. He is on a deliberate and dedicated path to build a greater Russia, an empire where the Soviet Union once stood.

As Putin spoke in Munich in 2007, the atmosphere in the ballroom changed palpably. Having initially offered Putin a polite welcome, the audience – even those who shared Putin’s criticism of the Iraq war – reacted with shock, concern and even offense. Contrary to the qualified optimism that still prevailed about Russia, it sounded as if Putin was driving toward a new Cold War.

What Happened in the years before Putin's Munich Speech

After the fall of the Berlin wall and the dissolution of the Soviet Union, it seemed as the if the newly born Russion Federation opened up to the ‘free world’ and its ideas about democracy and state sovereignty. Notably, Russia signed the Budapest Memorandum of 1994, which guaranteed Ukraine’s sovereignty and territorial integrity with the international borders in effect at that time, in exchange for Ukraine giving up the third-largest nuclear stockpile in the world. In 1997, NATO and Russia signed the “Founding Act” establishing a Permanent Joint Council and identifying a number of areas where the western alliance and Russia would work together to strengthen security — an “alliance with the Alliance,” as some of its architects in the Clinton administration put it at the time.

However, things started to change in the late 1990s and early 2000s. Russia was not happy with the NATO-led war in Kosovo, nor with President George W. Bush’s decision to invade Iraq in 2003. Putin became president of Russia in 2000 and declared his intention to restore Russian greatness. At the time, many Russians and international observers – including some in the Bush administration – welcomed his words. Coming on the heels of a decade of what many saw as wild-west capitalism, corruption, and breakdowns in law and order, Putin seemed poised to make a necessary correction that would strengthen Russian stability and modernization without doing major damage to its democracy.

In hindsight, however, we can see that what Putin meant by Russian greatness was not strengthening the rule of law and building up Russia’s economy and international stature in the world. Upon taking office, he methodically went about rebuilding the Russian military, modernizing and expanding Russia’s nuclear arsenal, reviving and expanding Russian intelligence services and activities. That in itself was not necessarily a problem, except that Putin also started dismantling the nascent Russian democracy: taking control of media outlets, consolidating state industries and undermining opposition to his United Russia party, including by assassination of political opponents. Putin didn’t just tame the oligarchs of the 1990s; he replaced them with his own. He was creating something resembling a Soviet system of Communist Party control, just without the Soviet ideology and a personal structure of rule in place of the old Party nomenklatura.

A clue to his thinking came in 2005 when he described the collapse of the Soviet Union as the greatest tragedy of the 20th century. Then, in 2007 at Munich, that shift in rhetoric became unmistakable.

What Happened After Putin's Munich Speech?

Following the speech, Putin matched his words with actions, dismantling the structures designed to keep peace in post-Cold War Europe. Russia formally announced in July 2007 that it would no longer adhere to the Conventional Armed Forces in Europe Treaty. It continued to reject the principle of host-nation consent for its troop presence in Georgia and Moldova, and began ignoring Vienna Convention limits on troop concentrations, exercises and transparency.

In 2008, Russia invaded Georgia, trading its peacekeepers in the regions of Abkhazia and South Ossetia for regular military personnel, and driving tanks toward the capital, Tbilisi. Six years later, Russian operatives took over Crimea and rapidly orchestrated its illegal annexation by Russia. Russia followed up with attacks in eastern Ukraine and continued to engage in low-intensity fighting and to occupy parts of Donbas.. Later, Russia violated the INF Treaty and began to deny overflights requested under the Open Skies Treaty. In 2022 he started a full scale war in the Ukraine.

Thank you, very much dear Madam Federal Chancellor, Mr Teltschik, ladies and gentlemen!
I am truly grateful to be invited to such a representative conference that has assembled
politicians, military officials, entrepreneurs and experts from more than 40 nations.
This conference’s structure allows me to avoid excessive politeness and the need to speak in
roundabout, pleasant but empty diplomatic terms. This conference’s format will allow me to
say what I really think about international security problems. And if my comments seem unduly
polemical, pointed or inexact to our colleagues, then I would ask you not to get angry with me.
After all, this is only a conference. And I hope that after the first two or three minutes of my
speech Mr Teltschik will not turn on the red light over there.
Therefore. It is well known that international security comprises much more than issues relating
to military and political stability. It involves the stability of the global economy, overcoming
poverty, economic security and developing a dialogue between civilisations.
This universal, indivisible character of security is expressed as the basic principle that “security
for one is security for all”. As Franklin D. Roosevelt said during the first few days that the
Second World War was breaking out: “When peace has been broken anywhere, the peace of all
countries everywhere is in danger.”
These words remain topical today. Incidentally, the theme of our conference – global crises,
global responsibility – exemplifies this. Only two decades ago the world was ideologically and
economically divided, and it was the huge strategic potential of two superpowers that ensured
global security. This global stand-off pushed the sharpest economic and social problems to the
margins of the international community’s and the world’s agenda. And, just like any war, the
Cold War left us with live ammunition, figuratively speaking. I am referring to ideological
stereotypes, double standards and other typical aspects of Cold War bloc thinking.
The unipolar world that had been proposed after the Cold War did not take place either. The
history of humanity certainly has gone through unipolar periods and seen aspirations to world
supremacy. And what hasn’t happened in world history?
However, what is a unipolar world? However, one might embellish this term, at the end of the
day it refers to one type of situation, namely one centre of authority, one centre of force, one
centre of decision-making. It is world in which there is one master, one sovereign. And at the
end of the day this is pernicious not only for all those within this system, but also for the
sovereign itself because it destroys itself from within.