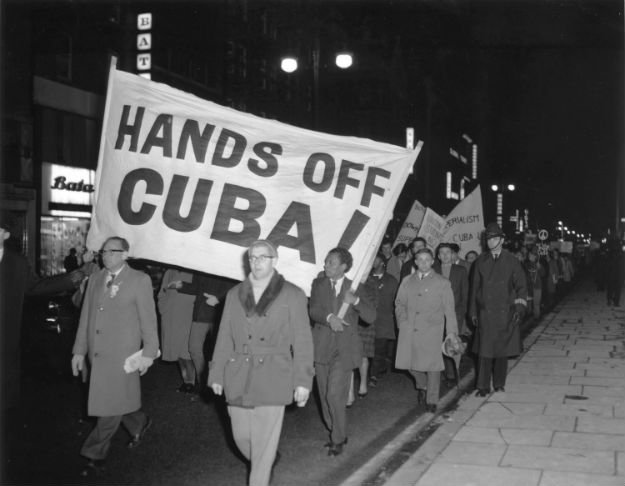 On October 14, 1992, the PBS aired the documentary “The Cuban Missile Crisis: At The Brink.” The program looked back at the event thirty years earlier that nearly led to nuclear war between the United States and the Soviet Union.

The stationing of Soviet nuclear missiles in Cuba led to the Cuban Missile Crisis., a confrontation between the United States and the Soviet Union in October 1962. President Kenny demanded the removal of the weapons. When first Secretary Khrushchev refused, the US imposed a naval blockade in the direction of which Soviet ships carrying missile components continued, having already set sail from Russia. At the last minute, Khrushchev ordered the fleet to turn around and the missile to be dismantled. 1History the definitive visual guide, p532, DK publishers

For thirteen days in October 1962, the world waited—seemingly on the brink of nuclear war—and hoped for a peaceful resolution to the Cuban Missile Crisis.

In October 1962, an American U-2 spy plane secretly photographed nuclear missile sites being built by the Soviet Union on the island of Cuba. President Kennedy did not want the Soviet Union and Cuba to know that he had discovered the missiles. He met in secret with his advisors for several days to discuss the problem.

After many long and difficult meetings, Kennedy decided to place a naval blockade, or a ring of ships, around Cuba. The aim of this “quarantine,” as he called it, was to prevent the Soviets from bringing in more military supplies. He demanded the removal of the missiles already there and the destruction of the sites. On October 22, President Kennedy spoke to the nation about the crisis in a televised address.

No one was sure how Soviet leader Nikita Khrushchev would respond to the naval blockade and US demands. But the leaders of both superpowers recognized the devastating possibility of nuclear war and publicly agreed to a deal in which the Soviets would dismantle the weapon sites in exchange for a pledge from the United States not to invade Cuba. In a separate deal, which remained secret for more than twenty-five years, the United States also agreed to remove its nuclear missiles from Turkey. Although the Soviets removed their missiles from Cuba, they escalated the building of their military arsenal; the missile crisis was over, and the arms race was not.

In 1963, there were signs of a lessening of tensions between the Soviet Union and the United States. In his commencement address at American University, President Kennedy urged Americans to reexamine Cold War stereotypes and myths and called for a strategy of peace that would make the world safe for diversity. Two actions also signaled a warming in relations between the superpowers: the establishment of a teletype “Hotline” between the Kremlin and the White House and the signing of the Limited Nuclear Test Ban Treaty on July 25, 1963.

In language very different from his inaugural address, President Kennedy told Americans in June 1963, “For, in the final analysis, our most basic common link is that we all inhabit this small planet. We all breathe the same air. We all cherish our children’s future. And we are all mortal.”