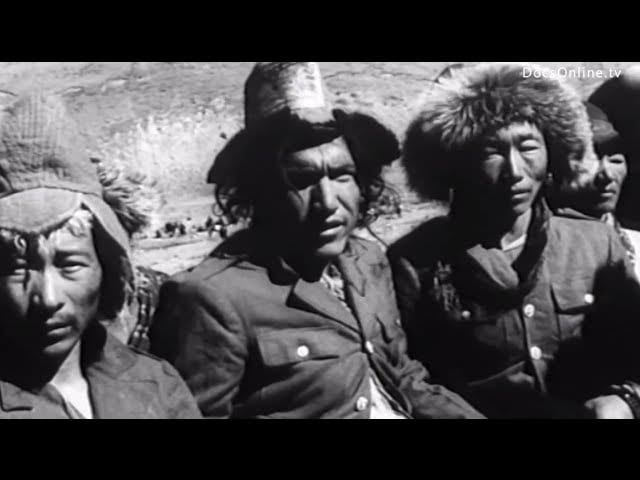 THIS FRAGMENT OF THE DOCUMENTARY “TIBET THE CHINESE LIE” IS FOR PROMOTION PURPOSES ONLY. WE DO NOT OWN THE MATERIAL EXCLUSIVELY, BUT HAVE A LICENSE CONTRACT FOR INTERNET STREAMING.

Situated deep in the Himalayas lies the former sovereign nation Tibet. Also known as The Roof of the World, the geographical location of this spiritual country kept it relatively isolated for centuries conserving a deep-rooted Buddhist culture. This all changed in the beginning of the 20th century. First, Tibet was invaded by the British in 1903, followed by the Chinese self proclaimed liberators in 1949. In the following years The Peoples Republic of China used cunning tactics to try to win over the hearts and minds of the Tibetan government and citizens. When this tactic proved unsuccessful the Chinese Maoists resorted to violence and oppression, forcing the Tibetan spiritual leader, The Dalai Lama, along with many monks, aristocrats and citizens, into exile. The documentary Tibet The Chinese Lie gives an overview of this on-going conflict with eyewitness accounts of Tibetans in exile and archive footage mainly consisting of Chinese propaganda films.

The Peoples Republic of China has always made the world believe that the Chinese presence benefits the 6 million Tibetans. They introduced (socialist) education, built roads and high-rise buildings and started to exploit the natural resources of Tibet undermining the traditional Buddhist way of life. The Tibetans were not allowed to voice their opinion about any of these measures, even though they were slowly stripped of the values most important to them, since religion in communism is considered as Opium for the people. In 1956 things took a turn for the worse when protests broke out and China changed its tactics to a more direct and violent approach leading to decades of loss of identity and destruction of culture and Buddhist artifacts (Cultural Genocide), beside the famine, imprisonment, violence and killings. In the last 10 years the Chinese imperialistic ambitions are finally fully revealed with the creation of the Qingzang-Lhasa railway leading to a mass colonization of Han Chinese in Tibet. Only 1/3 of the population of Lhasa remains Tibetan, and the once so magical and mystical capital, with its breathtaking Norbulingka Palace, has changed into a capitalist town full of Chinese owned shops.

In the last 60 years only sporadically news from uprisings in Tibet reach the international media. Especially in the beginning the only imagery the West encountered from Tibet was carefully selected Chinese propaganda. The international community has never condemned the Chinese actions in Tibet openly, partly because of clever tactics used by the Chinese denying the fact that Tibet ever was a sovereign nation. For example: They even forced (read blackmailed) the Dalai Lama to officially deny Tibets claims of sovereignty. Nowadays Tibet is more easily accessible because of the Qingzang-Lhasa railway, the highest in the world. And even though more impartial journalism about Tibet is reaching the West the international community remains silent still. The current lack of international attention for the Tibet issue may be explained by the position of China on the Global Financial Market. Criticism on the Chinese annexation of Tibet may well result in economic sanctions or losses for nations that oppose the Imperialist ambitions of China.