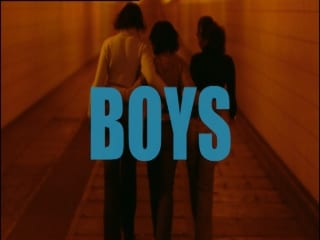 Angele, Sheena and Soraya are three sixteen-year old girlfriends who discuss what’s most on their minds: boys, love, music and sex. ‘Boys’ is a hip and stylish documentary short (29 min) that deals with the universal theme of puberty set in the backdrop of multicultural society today. This film follows three ‘city’ girls during overnight stays, at parties, at their dance class with their favourite teacher, while shopping and at school. They talk about everything, boys in particular.

The documentary ‘Boys’ is all about teenage questions. Do girls today loose their virginity sooner? Are teens more aware and self conscious? What is the right moment to have sex for the first time. What is a good kiss and who is a good kisser? What is in and what is out? How important are friends, romance, parents, school and dating. The girls act tough, wear sexy clothes and talk boldly about having sex and chasing boys. Yet, they remain unsure about their first time. What should it be like and even more important with whom?

Prior to World War II, young people in Western culture had little freedom or influence. With the development of post-war affluence and the subsequent baby boom in the USA and Europe, young people began to gain considerable societal influence and buying power. The tastes of young people began to drive fashion, music, films and literature. Corporations quickly took note and adapted to the shift by devising marketing strategies for the new demographic, creating magazines such as NME and eventually TV channels, like MTV.

Teenagers have been an important factor in many movements for social change around the world because teenagers tend to differentiate themselves from the parent culture of their community. Yet today, the reverse process is as much true. In commerce, which is part of the parent culture, this generation is seen as an important target. Mobile phones, popular music, movies, television, sports, video games and clothes are heavily marketed and often popular amongst adolescents. So the question is justified – who is changing whom?