The mothers house
Next Video 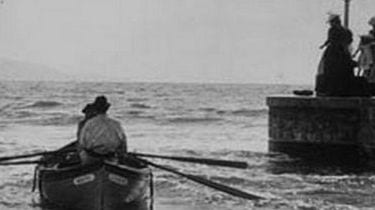 Auguste and Louis Lumiere are credited with the world’s first public film screening on December 28, 1895. Boat leaving the port is one of their first films showing a single shot of a boat leaving the port. The film exemplifies how the Lumieres used the film camera as a recording instrument whose main advantage over the still camera was that it could capture the element of movement.

Auguste and Louis Lumiere are credited with the world’s first public film screening on December 28, 1895. The showing of approximately ten short films was held in the basement lounge of Salon Indien du Grand Cafe in Paris and would be the very first public demonstration of their device they called the Cinematograph which effectively functioned as camera, projector and printer all in one. Each film was hand cranked through the Cinematograph and ran approximately 50 seconds. Ironically as we look back in retrospect in comparison to what film has developed into today, the Lumiere Brothers believed it to be a medium without a future as they suspected that people would bore of images that they could just as easily see by walking out into the street.

The lumiere brother’s work consisted mainly of moving images from scenes of everyday life. These single-scene actuality films are often cited as the first, primitive documentaries. They also made the first steps towards comedy film with the slapstick of L’Arroseur Arrose. Their film sequence of a train pulling into the station the arrival of a train at La Ciotat Station reportedly had audiences screaming and ducking for cover as they believed that the train itself was about to plow into the theater.

Moving images are so pervasive in our lives today that it is hard to imagine a time when people did without them. They’ve become an essential element in the way we communicate, the way we think. The reproduction of image, along with the reproduction of sound, has radically changed the world. If we stop for a moment and recognize that less than two centuries ago none of this existed, it is even more astounding. The idea of recorded sound is enough to give one pause. A concert, for instance, was a special occasion once. To hear Beethoven’s Ninth, you couldn’t pop a CD into your player. You probably heard it only a few times in your life, if at all. Such observations may seem obvious when stated, but familiarity has all but erased the oddity of it all. And familiarity breeds contempt too, as the old saying goes – one can grow tired of Beethoven’s Ninth if you’ve heard it hundreds of times. In the same way the barrage of sensory input we experience every day can dull our senses and coarsen our taste while we take it all for granted.

About the Lumiere family

Father Antoine Lumiére was a photographic entrepeneur in Lyons, France. His younger son Louis invented, in his early 20s, a formula that produced a finer photographic image and streamlined the production process as well. By the 1890s they were wealthy. Lumiere and Sons were second only to Kodak in the entire world. Their wealth and facination with the prospect of moving images enabled the Lumiere’s to experiment with the development of the first movie camera. Yet the Lumieres pioneered not just the technicalattributes of the camera but also its artistic attributes, creating a dialogue of REALISM that has always been a crux of cinema as distinct from the fantastic film tradition.